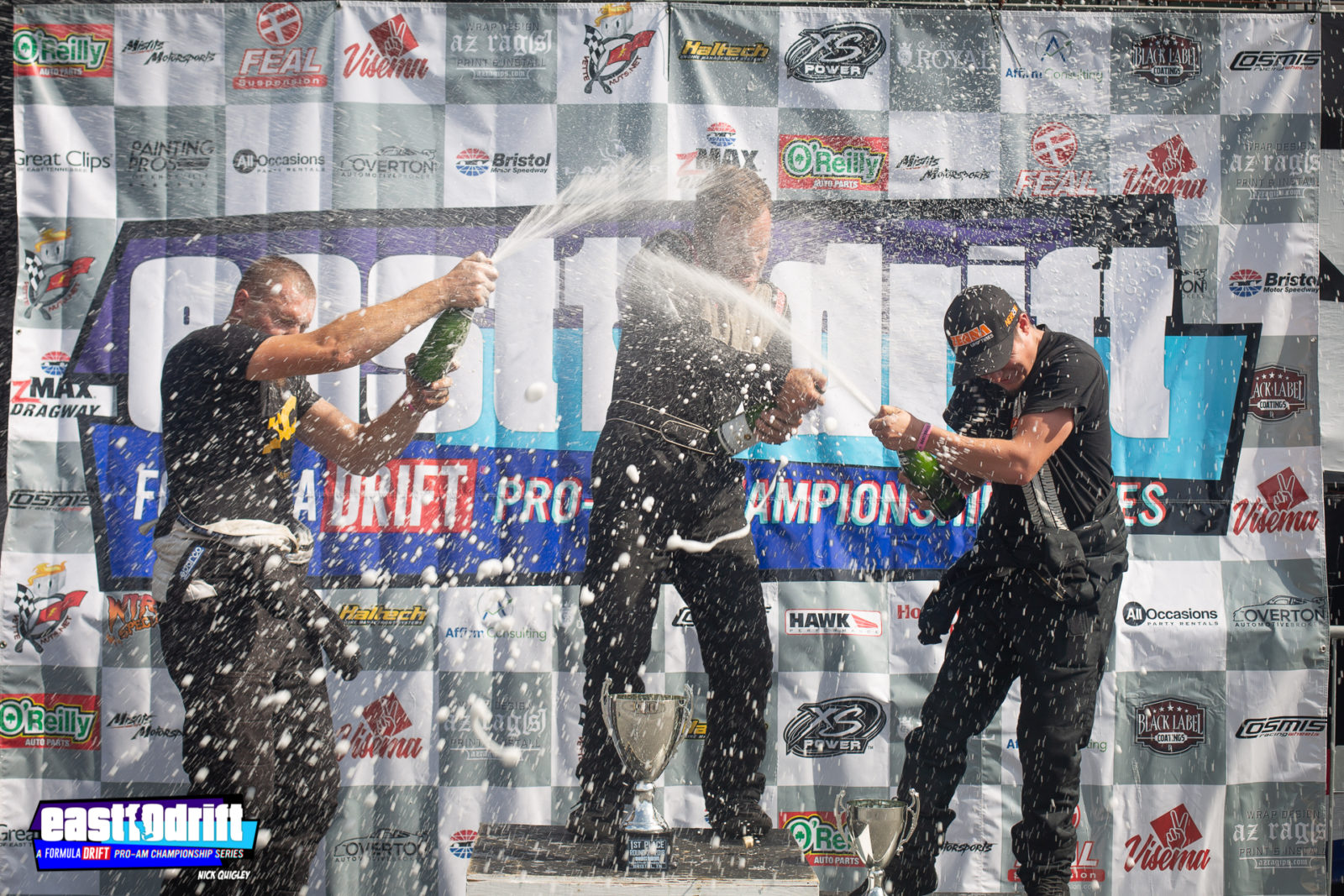 Coming off a successful inaugural round at ZMax Dragway in North Carolina, the East10 Pro-Am series took to the east parking lot of Bristol Motor Speedway for a two-day, two round event.

Round two took place on Saturday, with the third round and a complete layout change happening on Sunday. The initial course design mimicked that of the Texas round of Formula DRIFT, and nineteen drivers would do battle trying to earn that Pro 2 license.

There were, as expected, a few minor bumps and bangs, but the one that seemed to temporarily freeze time came mid-day during practice.

Zach Leffel slammed hard into the concrete barriers protecting a power pole after his steering got caught on his headers. Leffel was thankfully uninjured, but definitely out of contention for the rest of this round and the next.

Due to the odd number of drivers and the seeding method of qualifying, three drivers, Tyler Foley and his orange E36, Ethan Parnell in his black S14 and Abe Heath in his patriotic themed S13 battled in the first “round” to fill in the three empty spots in top sixteen.

Tyler Garlatz, fresh off a third place finish at round one, found himself the top qualifier at round two. He would go on to defeat Foley in the first top sixteen pairing.

Scotch McDonald got the win in his battle with Stephen Johnstone’s Mustang.

Dmitriy Brutskiy and his Z4 would knock out Jake Elliot’s S13 in the next pairing, inching the Z4 closer to the podium.

Round one winner and points leader going into round two, Stephen White bested Ethan Parnell in his rise to the top.

Michael Wallis and his purple and gold S14 met round two runner-up Justin Bauer in their match, ultimately resulting in Bauer getting the nod.

Venturing all the way from Quebec, Eric Brunet took his R34 a step closer to the finals with a win over Abe Heath.

Rounding out top sixteen was the battle between Bryan Broberg’s S13 and Cory Talaska’s E36, with Germany advancing against Japan to get the win.

Garlatz bested McDonald in the first bout of the great eight, as the S13 soldiered on.

Brutskiy also advanced with a win over Kyle Wood, pushing round one’s top qualifying seed on to the final four.

Bauer slid past White on his way up the ranks, eliminating White’s possibility of a repeat victory.

In the battle of alphanumerics between Brunet’s R34 and Talaska’s E36, the Nissan would take the win to conclude the great eight.

Garlatz kicked off the semifinals with a win over Brutskiy, sending the Z4 to battle it out for third.

Brunet would end up in that battle against Brutskiy after a loss against Bauer’s S13.

I can’t imagine there have been many R34 vs Z4 battles before, but the contest for third was as such. In the end, Brutskiy took home the bronze.

This left Garlatz and Bauer to duke it out for top honors, with Garlatz securing the top spot.

“This is just absolutely insane,” Garlatz said. “If I could put it into words, it’s just amazing, as cliche as that sounds.”

With his car presenting no issues, Garlatz said the layout proved frustrating at first, but once he got comfortable, he was more favorable of the design.

“You go out and kick it sideways what you think is aggressively, then you fall short of the rear zone,” he said of the first two clips. “By the end of the day, my foot didn’t leave the floor for probably the first three-quarters of the course. Once you get used to it, it’s the type of course that helps you progress as a driver.”

Bauer, with his repeat second place performance, got to that point battling not only the competition but his own car. He wasn’t able to achieve full lock without the steering binding up, but on a more positive note, a new Fluidyne radiator helped keep his engine temps low.

“Me and the car had battles hardcore throughout the day,” he said. “I couldn’t go full lock because it binds up horribly.”

On a side note, Bauer, who was one of a handful of drivers producing huge clouds of smoke, said he was going through a set of rear tires after every pairing.

“It’s so nice to finally have gotten to this point,” Garlatz said of his victory. “We have no problem saying this, but it’s a long road to get here with plenty of sleepless nights. I think we blew five engines in nine months trying to get to this point.”

With a car he says is finally reliable, Garlatz had his sights set on another win.